Monday of the First Week of Advent

A man was imprisoned for misappropriating public money.  The sentence was long enough to chasten him.  He was also humbled by the support he received from his family during his incarceration. This man’s experience mirrors the lessons of today’s Scripture readings.

Isaiah proclaims a renewed Jerusalem after her defeat, demolition, and exile.  Those who have survived the punishment are called “holy.”  The centurion in the gospel manifests Jerusalem’s holiness.  Strikingly, he is a Roman.  Yet he recognizes in Jesus, the Lord’s prophet, a power beyond that of human knowledge or sword.

Humbled by a year of graces, we enter Advent’s expectation of the Lord.  We see that only he can satisfy our longings.  We join Jesus’ Jewish apostles in their benevolent vigilance of Christ’s coming.

Downton Abbey, the hugely successful television drama, tells of an aristocratic family living in an old English monastery with many servants. In the first episode, a middle-class man is having coffee with his mother. This man is passed a letter with the news that he is the heir to the abbey. His mother asks him what the letter says. He replies, "Our lives are going to change." It is true because henceforth they are going to live in luxury. In the gospel today Jesus says that the lives of his disciples will change as suddenly and completely as this man's.

Jesus was talking to his disciples about the end of time. When asked when it will happen, Jesus responded with a discourse. In it he says that there will be much deceit and that the Temple will be desecrated. Then he will arrive to lead his people into his kingdom. For this reason, he advises them to watch because it will happen as suddenly as lightning.

But what does he mean to "watch"? For Jesus, watching does not consist in keeping one's eyes fixed on the horizon. Rather, his disciples watch for his coming by doing good works. As firefighters anticipate fighting fires by doing various exercises, Christians anticipate the Lord by works of mercy.

If we do not prepare ourselves with good works, Jesus warns that we will be lost. We will be like the man left in the field or the woman left at the mill when he arrives to gather his followers together. In the second reading St. Paul describes the lost (that is, people who do not watch) with striking words. He says that they engage in binge eating and drinking, debauchery and lust instead of acting like Jesus Christ.

We have this Advent season to reflect on the coming of Jesus. It has three strata which we will take in reverse order as it is done in the liturgies. First, we consider his coming at the end of time. We want to be ready for it whenever it occurs. Second, we will reflect on his coming as proclaimer of God’s Kingdom. We focus on John the Baptist, his forerunner, who describes for us both Jesus’ mission and his greatness. Finally, at the end of Advent, we will contemplate the incarnation when the Son of God came into the world as the son of Mary and Joseph.

During these reflections we will face a dilemma. It's Christmas time. All around us people are busy with material concerns: gifts, parties, and vacations. The question is, are we going to prepare for the Lord or are we going to become caught up in physical longings? Advent is not Lent when we do penance. However, the season requires the attention of our spirit. At least we should pray more to prepare our hearts to welcome the Lord.

Let us conclude with a reflection on the wonderful vision of the prophet Isaiah in the first reading. It is a panorama of the world at peace. Because armies no longer need weapons to kill, they forge them into harvesting tools to sustain life. The desires of the people are softened and their passions calmed. The prophet had this vision for the Temple in Jerusalem. However, we Christians have adapted it in accordance with our experience of the Lord Jesus. He is the sacrifice and altar that put an end to wars among nations. He is the justice that satisfies the world’s deepest yearnings.

Friday of the Thirty-fourth Week in Ordinary Time

Today, the penultimate day of the liturgical year, the first reading enters the penultimate chapter of the Bible.  It has been quite a saga.  From creation when God called all that he had made “very good” through periods of human failure and folly to the ultimate victory of Christ over sin and death.  Now the holy city appears as glorious a habitat as can be imagined.  It seems to question the people if they wish to live in it.

One would think that the answer to the question could not be simpler.  Why wouldn’t anyone want to take part in Christ’s victory?  Unfortunately, humans are as mischievous as they are unpredictable.  They sometimes prefer to be considered bad rather than good, lazy rather than industrious, and even unique rather than beautiful.

Hopefully, we will opt for the holy city.  It means that we do good works so that our names may be written in the book of life.  We will find some of our companions along the way to have not been to our liking.  But then in the light of Christ which illumines the city we will know them for all the good that they have done.

Several characteristic Christian themes converge in today’s celebration of Thanksgiving.  We give thanks to God for all the good of creation.  Nature is abundant so that humans may have more than what is necessary to survive.  We also recognize how European immigrants needed the assistance of native people to overcome the challenges of settlement.  Thanksgiving then represents reconciliation among peoples, one of the great benefits of Christ.

A third characteristic of Thanksgiving is community.  Thanksgiving alone would be almost meaningless.  We come together in love with family and friends.  We also remember those who live in need, at least with our prayers and quite possibly after some practical effort of support.

Although thanksgiving is not an expressly Christian feast, we can hardly not show gratitude to God for giving us His Son, Jesus Christ.  He cleanses us of the desire to eat and drink too much today.  More than that, he brings us the hope that that the joy and love we experience will be multiplied innumerable times in eternal life.

Thursday of the Thirty-fourth Week in Ordinary Time

Four years ago, a man entered a religious goods store and committed horrible crimes.  He sexually violated two women and killed one of them.  The barbarism resembles the happenings which Jesus foresees in today’s gospel.  He says that lawlessness and destruction will take place everywhere at the end of time.

In all likelihood the evangelist Luke embellished the prediction of Jesus with accounts of actual events.  Not long before he wrote his gospel Roman troops decimated Jerusalem.  They not only destroyed the Temple beyond hope of rebuilding but evidently ravaged the people.  Such marauding is typical of foreign soldiers sent to punish a nation.  It is no wonder then that the first reading describes the downfall of Rome in such graphic terms.  “Babylon” is a code word for Rome since both were associated with extravagant hedonism.  According to the reading, Rome is completely devastated.  It is as if an earthquake swallowed up the city.

Both Luke and the author of Revelation mean to encourage Christians to live righteous lives.  They see Jesus as coming to save his people when the situation becomes most desperate.  He will recognize them by their courage to stand erect in hope of being rescued.  The righteousness and courage which the Scriptures bespeak include efforts to build a society of justice.  We cannot be able to eliminate all crime and misfortune in the world.  But guided by the gospel and with the help of the Holy Spirit we can approximate the peace of the Kingdom of God.

Wednesday of the Thirty-fourth Week in Ordinary Time

As the seer nears the end of his Revelation, he has favorable news to report.  In today’s passage he sees seven angels carrying seven bowls of plagues that will wipe out Christian persecutors.  Like the ten plagues liberated the Israelites in Egypt, the seven plagues of the Apocalypse will crush Roman oppression.

But before the plagues take their toll, John reports a heavenly recital evoking more memories of Passover.  Those who have come through the trials with intact innocence play the victory song of Moses.  They use harps -- instruments of sweet, peaceful sounds.

Sometimes the Book of Revelation is exploited to defend anger and revenge.  But its message is deeper and more subtle than the wrathful images it contains.  It tells of God’s care for those who do His will.  It promotes both righteous living and turning to God for help.  It endeavors to free us from worry when we face challenges.  It assures that God is ready to help us when we call on Him. 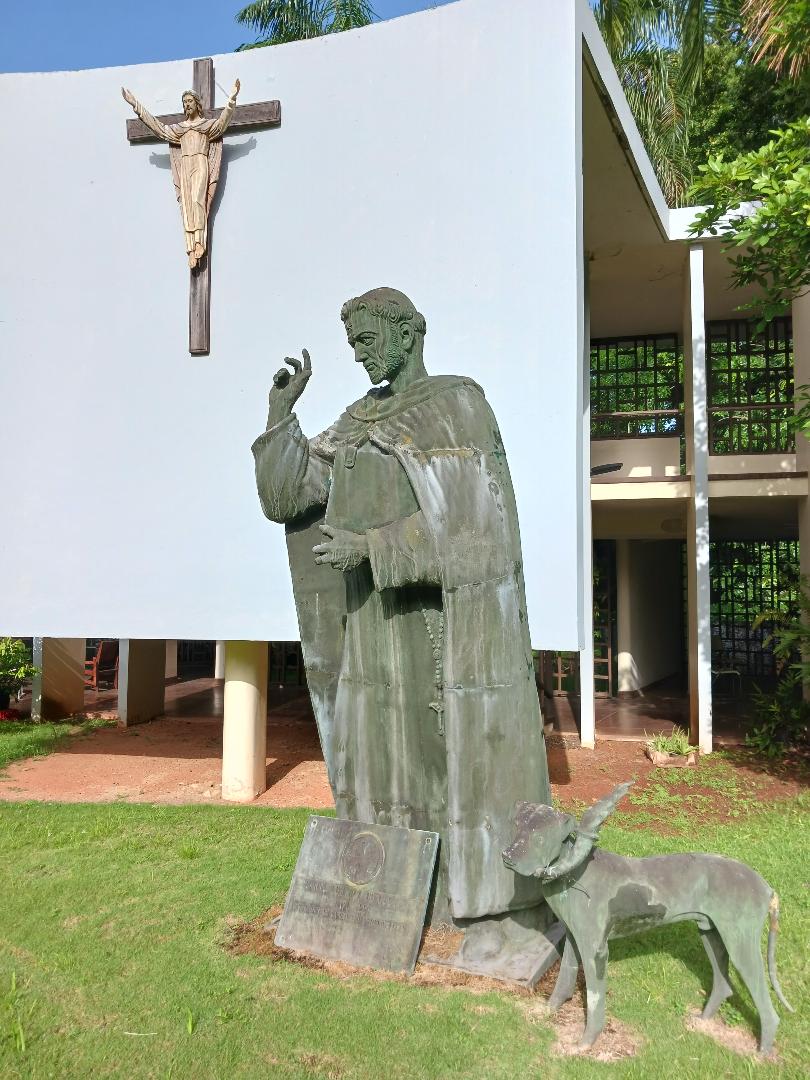 (Rev.) Carmen Mele, O.P.
- Bilingual Catholic priest of the Southern Dominican Province. - Currently serves in Puerto Rico. - The "homilettes" on this website are completely his work. - He may be contacted for preaching at cmeleop@yahoo.com or (telephone) at (415) 279-9234. - authors a blog with a Sunday homily in Spanish at www.padrecarmelo.blogspot.com.